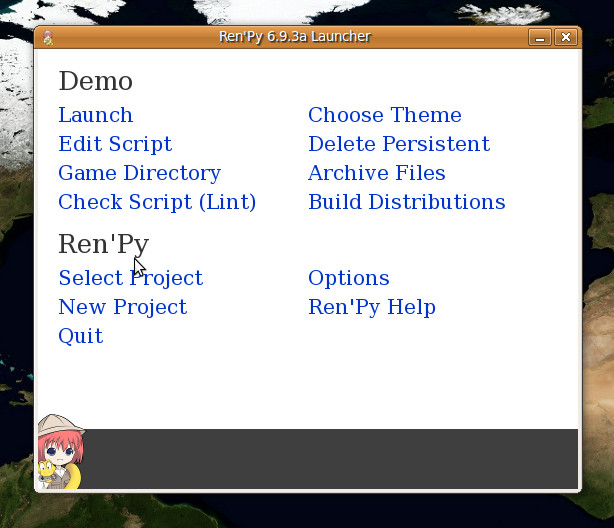 2009-10-03
When reading from an archive file, Ren'Py can issue a read of negative length, which can be disastrous on some platforms. Updating renpy-6.9.3/ will fix this. As this bug is platform-sensitive, the fix should be applied to all distributed games.

2009-08-31
The new launcher had the font hard-coded in a number of places. Downloading a new version of renpy-6.9.3/ will fix this, allowing the new launcher to be translated.

Downloads of 6.9.3 and a full release announcement can be found at:

Bugs in Ren'Py itself (as opposed to questions about using Ren'Py) should be reported to the new bug tracker:

To migrate your game from Ren'Py 6.9.2 or later, copy the directory containing your game into your projects directory. You can choose a projects directory by clicking "Options", "Projects Directory" in the Launcher. Please see the 6.9.2 release notes for information about migrating from older releases.

This release includes Launcher2, a near-total rewrite of the Ren'Py launcher. Among the more important changes are:

The new ui.detached function allows one to use the ui functions to define displayables without adding them to a layer.

Ren'Py will now search for a directory named "Ren'Py Data" in the directories above your Ren'Py installation. If found, save data will be placed in that directory, rather than the system-specific default location. This should help make it easier to develop Ren'Py games when using a USB drive.

The save location for screenshots has now been standardized. It is now the directory containing the executable used to start Ren'Py, be it a .exe, .py, .sh, or .app. (The latter is handled specially.)

Allow config.layer_clipping to specify layers that are larger than the screen.

This distribution include a new NVL-mode tutorial, teaching people how to make NVL-mode games.

Fixed a long-standing problem that could cause Rollback to operate incorrectly with object that were unreachable at the time of the Rollback.

Fixed a problem that prevented animations from displaying correctly when the animation was displayed more than once.

Fixed a problem that could cause children of the various MultiBox-based displayables (Fixed, HBox, VBox, and LiveComposite) to display animations incorrectly.