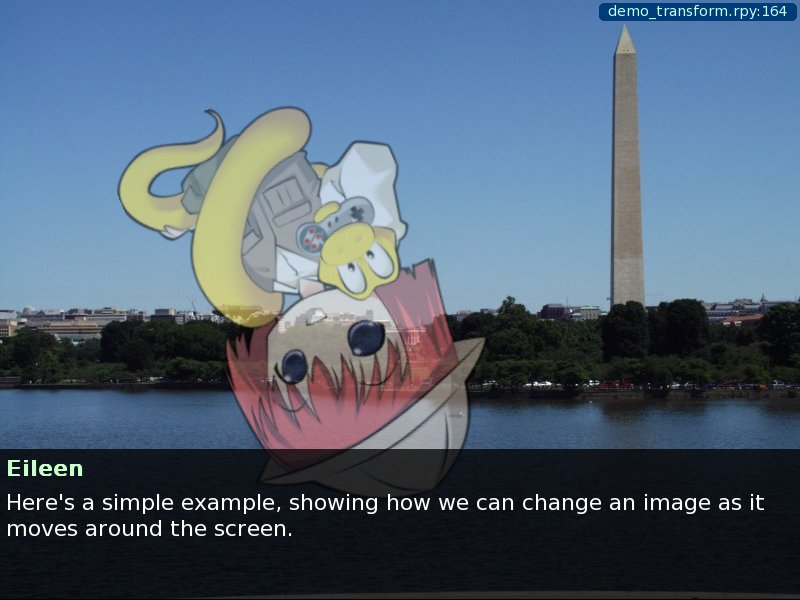 2009-03-21
Ren'Py 6.9.0h has been released. This fixes a bug that triggered on Linux when a displayable moved off screen, and a bug that triggered when a RotoZoom was larger than the screen. Since the first bug isn't apparent on other platforms, all users are encouraged to upgrade before release.

2009-03-17
Ren'Py 6.9.0g has been released, fixing more issues with the new rendering code. This also includes the pefile.py update.

2009-03-12
An update to renpy-6.9.0/ to fixes a "RESOURCE_BASE is no longer correct" exception when building distributions that include a windows icon. (This is the second update for this problem. The first one generated incorrect executables.)

Nearly three months in the making, Ren'Py 6.9.0 "The Long and Winding Road" has been released. This release contains complete rewrite of one of the most fundamental components of Ren'Py, the rendering system, to reduce complexity, improve portability, and increase speed and framerate stability. It also adds in subpixel rendering, which can improve the smoothness of slow moves. It also allows for a new class that makes it possible to use Python to script rotation, zoom, movement, and alpha blending.

Along with these core improvements, this release includes a number of new features, including several that should begin to make Ren'Py programming easier, and the usual bug fixes.

Downloads of 6.9.0 and a full release announcement can be found at:

This release features a rewritten rendering system. The rendering subsystem is what manages drawing to the screen. There have been several major improvements:

Improved the transform routine used by RotoZoom and Transform. It's now both more accurate and faster. On Intel computers, it is now accelerated using MMX instructions.

is now equivalent to:

When compiling python blocks containing strings with a unicode character in them, Ren'Py will automatically prepend a u to any string that's missing it. This should make life easier for users of non-ASCII languages.

The new function makes it easy to make a bar that varies between two values over time.

The new renpy.Container class can be subclassed to create a user-defined displayable thatr contains other displayables, like Transforms.

The new image manipulator allows images to be scaled by a specified factor at preload time. This is generally faster than doing the equivalent scaling at display time with FactorZoom.

The new function allows sound and music to be smoothly panned over time.

The new variable allows a function to be called whenever control reaches a label. It can distinguish between jumps to that label and control falling through.

There have been a couple of places where properly documented functions have superseded semi-documented calls into the Ren'Py internals:

The and functions are now the preferred ways of getting access to the game menu.

The function now takes a transition argument, allowing it to subsume the undocumented _intra_jumps.

Ren'Py now looks for the file environment.txt in the directory containing Ren'Py itself. If it finds it, it loads the file as a python file, and uses it to set the default values of environment variables. This allows things like the editor or the scale factor to be set even on platforms that don't make it easy to change environment variables globally.

The reporting of parse errors involving missing quotes has been improved.

Changed the behavior of overlays during transitions. Now, both the old and new screens will use the new overlay. Previously, the overlay was cleared out during a transition, which didn't work well, as (for example) a dissolve would cause the overlay to blink out and then dissolve back in again.

and have been changed to take a layers argument, giving the list of layers the transition applies to. By default, this is only the master layer, which is a change in their behavior.

Ren'Py now autosaves when entering the quit prompt, and will not actually quit until this autosave is complete.

Fixed a divide by zero error that occured when Alpha was used for 0 seconds.

The default framerate () has been raised to 100 frames per second.

Added as a version of that requires two function calls, rather than three.

Libvorbis has been upgraded to version 1.2.0.