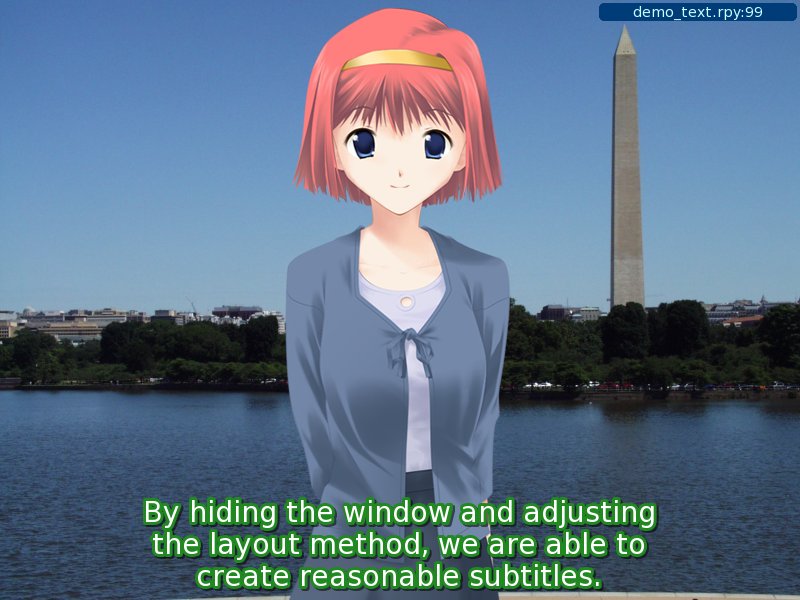 2008-11-11
There is a problem displaying a presplash image in the Mac OS X game distribution. (It doesn't show up when developing under Ren'Py.) Replacing renpy-6.8.0/ and rebuilding distributions will fix this problem.

2008-10-25
Final release (6.8.0f). This fixes a bug with adding icons under Windows, and also includes some modifications to the look and feel of the jEdit text editor: The BufferTabs plugin is now included, jEdit now uses the native look and feel, and the default font size has been increased.

With the economy in shambles and the election becoming more and more negative, sometimes people are looking for a bit of good news. Well, now you have it, with the release of Ren'Py 6.8.0 "Good News". This release has wide range of improvements in it:

Downloads of 6.8.0 and a full release announcement can be found at:

Ren'Py now includes its own font-handling library, derived from pygame.font/SDL_ttf, which it uses in place of them when possible. This gives two advantages:

There is now a new style property, that causes lines of text to have additional whitespace inserted between words so that the left and right margins are even, except on the last line of a paragraph.

Newly-created games will have a Help option on the main and game menus. This is controlled by the variable. By default the help system shows the README.html file in the game's base directory.

On Mac OS X, Ren'Py will not change the application icon unless is set. More specifically, it will default to the launcher icon rather than a generic pygame icon.

The Macintosh application will now show the name of the game in the menu bar, rather than "Ren'Py Launcher".

The "Continue Game" option on the main menu has been renamed "Load Game", for consistency with the game menu.

When is set and an undefined image is used in a show or scene statement, a list of undefined images will appear centered at the top of the screen. A black screen will be show instead of any missing background. This makes it easier to write a script before all images are present.

The newly-documented method lets you change the parent of a style. The new function allows styles to be rebuilt even after the game has begun running, with some caveats. (Changes are not persisted, for one thing.)

The new style property allows one to choose how unscrollbable scrollbars are displays. None keeps the current behavior, which shows the bar normally. If set to "insensitive", the bar becomes insensitive, while if set to "hide", the bar is not drawn at all.

The new method can be used by user-defined displayables to convert strings into Solid or Image displayables.

Alt-F4 and Command-Q now trigger the quit event, as if you pressed the quit button on the top of the window. The first press brings up the quit prompt, and a second press forcibly terminates the game.

The new RENPY_SCREENSHOT_PATTERN environment variable lets you configure the name of screenshot files. Ren'Py can now write out screenshots as JPGs, as well as PNGs.

Several of the libraries underlying Ren'Py have been updated. Pygame has been updated to version 1.8.1, while Freetype is now at version 2.3.7.

The presplash code now looks for presplash.jpg in the game directory if presplash.png is not found.

On Windows, config.window_icon will be scaled to 32x32 if it is wider than 32 pixels. This allows the same icon to be used across platforms.

Custom mouse cursors should now be properly hidden when the mouse leaves the window. Previously, this failed to work on the Mac OS X platform.

The launcher has been moved into the launcher/ directory. This really shouldn't matter much, but may affect packaging and translation.