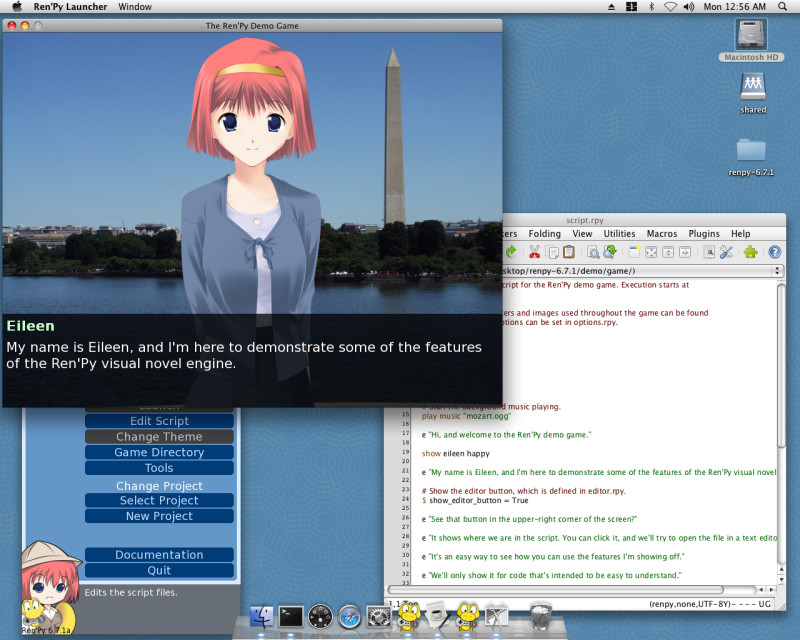 You only need to download one of these three files. Each of these files contains the full Ren'Py software development kit, allows you to develop Ren'Py games for Windows 2000 and up, Mac OS X 10.4 and up, and Linux x86. The development environment contains the files needed to produce games for all three platforms. Each file also includes the jEdit text editor, the Ren'Py demo, and "The Question", an example game.

2008-10-08:
Update renpy-6.7.1/ to fix a problem that could cause the bytecode.rpyb file to be regenerated unnecessarily.

2008-10-05:
The Avira Antivir virus scanner is incorrectly flagging the copy of jedit.exe included with 6.7.1d as a virus. It has been submitted to them as a false positive, and we're waiting on their response. (Update 2008-10-8: Avira emailed us back, and said that jedit.exe has been added to their list of false positives.)

2008-10-01:
The download has been updated to 6.7.1d. This improves the jedit experience, without changing Ren'Py. It also fixes a problem that occurred when starting jEdit in a directory with an apostrophe in its name.

I'm pleased to announce the release of Ren'Py 6.7.1 "Apple Juice". The primary focus of this release is improving Mac OS X support, which was done by producing a universal binary and distributing Ren'Py with the cross-platform jEdit text editor. The jEdit text editor also supports a number of nice new features, including an optional spell-checking plugin. Other features include:

I'd like to thank everyone who generously supported Ren'Py development over the past few months. Their donations allowed me to purchase a new Mac, which made improved Mac support possible.

Downloads of 6.7.1 and a full release announcement can be found at:

Ren'Py now ships with jEdit as its default text editor. This means Java 1.5 or later is now required to edit scripts.

The Macintosh application is now universal, including both i386 and ppc binaries. This means it should run faster on newer Intel systems.

Ren'Py will now use Launch Services to report errors that occur on the Macintosh.

User-defined displayables can now use a canvas to draw lines, polygons, arcs, and ellipses on the screen.

The new variable allows a portion of the window caption to be varied depending on the game circumstances. The new variable controls the value of _window_subtitle when in a menu.

Image preloading now takes place in a separate thread. This allows image loading to proceed even while animations are playing on the screen.

A new button in the launcher now provides easy access to the local copy of the Ren'Py documentation.

The definitions of and have been changed. While it's simplified, older values may no longer work. Please read the documentation for details of the new syntax.

Ren'Py now limits the framerate to 60 frames per second, which should improve smoothness on fast enough machines.

Ren'Py now scans the game directory for all .rpa files, and adds them to automatically. In addition, the archiver tool now prompts for the name of archives, and uses filename patterns to decide what to archive. This makes it easier to break the files up into multiple archives, in a single game.

The new function copies images with one prefix to a second prefix.

The launcher will no longer include directories beginning with a dot (like .svn and .bzr) when copying the template directory to create a new project.

This version includes a refresh of the character art included with "The Question". The new art is by Deji, and the full-color version of the art is available from http://wiki.renai.us/.